The Development of the Paper Money

During 17th and 18th centuries, the American people used English, Spanish and French paper money. In the years to come, the development of the paper money was affected very much by the political and financial circumstances as well as the government’s reserve of gold and silver.


In the early 1690s, the Massachusetts Bay Colony was the first out of the thirteen colonies (which gathered to become the United Statues) to issue a US paper money, followed by the different colonies to issue each its own banknote. This money was not redeemed in gold or silver and thus was depreciated.

In 1775, during the American Revolutionary War, and to finance the war, the Continental Congress issued the Continental Currency. This paper money expressed the new nation’s sovereignty and instead of pictures of the crown or the king of , they featured different motifs of the colonies. However, because of the inflation and as they were easily counterfeited, they became valueless and gained the phrase: "not worth a Continental".

In 1777, after the declaration of independence was signed, the first notes with the words “The United States” were issues signed by some of the famous revolutionary figures.
In 1791 and with the adoption of the new constitution, the Congress chartered in the Bank of North America - the first nation's bank and of which was authorized to issue banknotes. The Congress also determined that the official monetary system would be based on the dollar, only to begin with a few years later. In 1816, the congress chartered the Second Bank of the which existed for twenty years until 1836. These banks were privately owned and were authorized to issue paper bank notes and serve as the fiscal agent of the government. In 1832 Andrew Jackson vetoed the re charter of the Second Bank.
This followed by an era of which the American banking was comprised of state-chartered banks without federal regulation or uniformity in the operating laws. By 1860, an estimated 8,000 different state banks were circulating "wildcat" or "broken" bank notes in denominations from half cent to twenty thousands dollars.
Only on 1861 and again to finance the war (the Civil War), the Confederate Congress met in and authorized the government to issue paper currency (in the form of interest-bearing notes). Such notes were originally printed by the National Bank Note Co and were called Demand Notes or “Greenbacks” because of their green color.  In 1862, the Congress discontinued issuing Demand Notes and issued Legal Tender Notes, also known as the United States Notes. They were the first national currency used as a legal tender for most public and private debts.
Effects of the war such as shortage of gold and silver (and as a results shortage of coins) and existence of substitutes for paper money, waned the demand for the United States Notes during the war but it was resumed when the war finished.
Following the war, the Congress passed the National Banking Act in 1863 which established a national banking system and a uniform national currency to be issued by the new national banks. In later years, the government also, in a move to increase its reserve of precious metals, offered certificates in exchange for deposits of silver and gold.

By 1865 approximately one-third of all circulating currencies were counterfeit, and the Department of the Treasury established the United States Secret Service in an effort to control the counterfeiting.

By 1866 the National Bank Notes, backed by government securities, became predominant. By this time, 75 percent of all bank deposits were held by the nationally chartered banks. Notes were printed by private bank note companies under contract to the Federal government until 1877 when the Department of the Treasury's bureau of Engraving and Printing started printing all the currency. 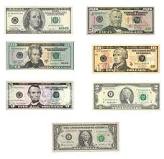 Posted by Coollectors at 5:47 AM