We welcome our new Collectors Category - Routemaster, the bus icon of London in the second half of the 20th century.

The AEC Routemaster is a London double-decker bus built by Associated Equipment Company (AEC) in 1954 until 1968. Front-engined buses generally with rear platforms, a small number were produced with doors and/or front entrances. Introduced by London Transport in 1956, the Routemaster saw continuous service in London until 2005, and remains on two heritage routes in central London.

Here we can see an example of one of the many models the collector presents. It is a DSCN16461 Corgi 477 Routemaster Bus Disneyland. 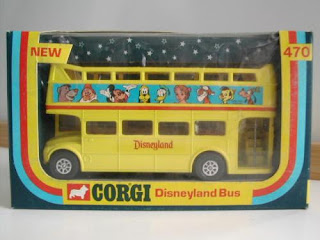 Posted by Coollectors at 8:58 AM